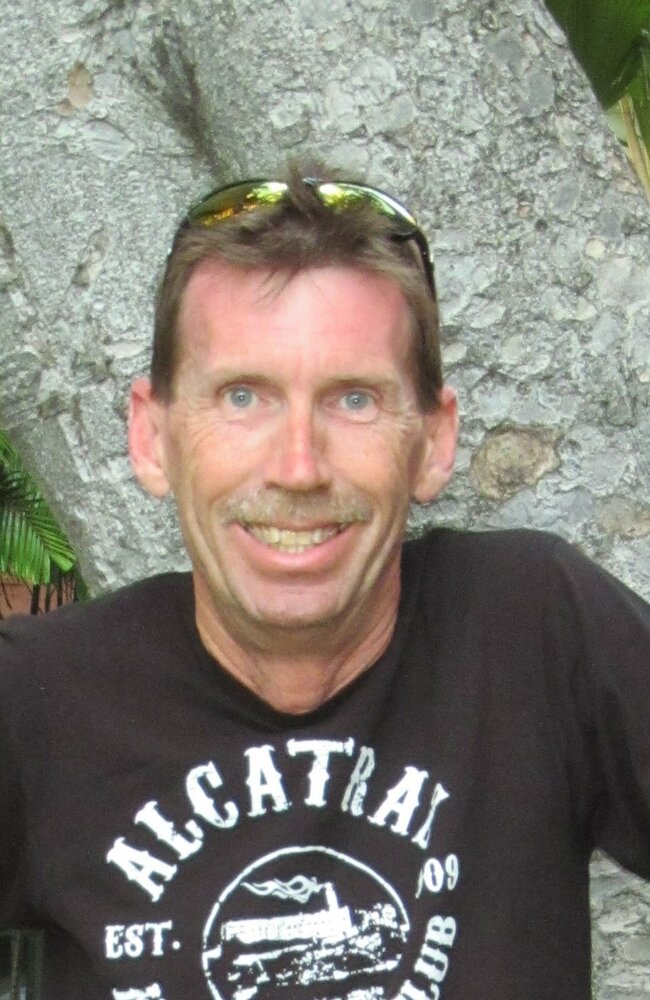 This is the story of Dee Jay Byerly. Dee Jay was a witty man with a dark sense of humor, smart mouth, and a huge heart. His smile lit up his family and his laugh was contagious. He was a loving husband and an amazing father.

Dee Jay’s story starts on August 31, 1964 in Downey, California. The youngest of 4 children to Earl Byerly and Gladys Waldo Byerly. He was welcomed into the world by his older siblings: Connie Byerly Pinkerton, Ron Byerly, and James Byerly. Dee Jay moved with his parents to Scranton, Iowa where he attended grade school, eventually graduating from Scranton High School in 1983. After graduating high school, he spent time living in California and Arkansas where he started a career as a truck driver. In time, he returned to Scranton where he reconnected with a childhood friend by the name of Loretta Sailer. Dee Jay quickly fell in love with Loretta and daughter Lexi Sailer McNeil who referred to him as her “little buddy”. The 3 amigos then moved to Arkansas where Dee Jay and Loretta became husband and wife and welcomed daughter Freedom Byerly Schott in 1993. In 1995, Dee Jay and his family moved back to Scranton, where he spent years raising his daughters and providing for his family. He worked as a truck driver for several years before accepting a position with the City of Scranton. He worked for the city for over 17 years as general city maintenance and Water and Wastewater Operator, eventually becoming the Superintendant. In 2017, Dee Jay and Loretta seized an opportunity to live their lifelong dream of moving from the Iowa cold and retiring in warm and sunny spot. He spent his final years living his best life in LaBelle, Florida.

Through the years, Dee Jay saw his siblings married off. Connie to Bill (Macrae, AR), Ron to Sharon (Carroll, IA) and Jim to Norma (Cottonwood, CA). He said goodbye to both of his parents. He gave away his daughters Lexi to Josh McNeil (Fort Dodge, IA) and Freedom to David Schott (Renton, WA) and in 2019 he proudly welcomed his first grandson, Axel Schott.

Dee Jay enjoyed life. He loved cracking jokes and playing games with his family and friends. He liked kicking back by the fire pit and enjoyed throwing a pole in the river and praying for a bite. He LOVED his family, and he loved playing trucks with his grandson – who just lit up EVERYTIME he heard his Grandpa’s voice! He loved filling his belly with his wife and daughters’ cooking and his son-in-law Josh’s exquisite BBQ, listening to 70’s and 80’s rock music, late night Mortal Combat battle royals and wasting endless hours watching TV and funny videos on YouTube.

Although this is only a brief summary of Dee Jay’s life – a life that ended way too soon, his unmatched wisdom and joy will live on though our memories. Dee Jay was many, many things; but loved was what he was the very most. He will never be forgotten and will remain forever in our hearts. His spirit lives on through the eyes of his wife, the laughter of his daughters, and the heart of his grandson and those he touched throughout his life.

To send flowers to the family or plant a tree in memory of Dee Byerly, please visit Tribute Store

Share Your Memory of
Dee
Upload Your Memory View All Memories
Be the first to upload a memory!
Share A Memory
Send Flowers