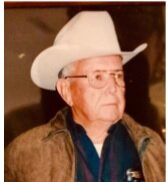 David Wesley Langford passed away peacefully at home on Thursday, January 5, 2023. He was surrounded by his wife and family, at the time of his passing. David was a wonderful husband, father and friend. He was loved and respected by so many and will be missed by us all. David was born on January 22, 1930, in Alva, Florida. He was the second of four children of Oscar and Gladys (Goggin) Langford. He was born and raised by his Uncle David and Aunt Verdie Goggin, on the same property that he passed away on. He attended school in Alva. After school he enlisted in the Army Air Corp on June 7, 1946. After being honorably discharged in 1948, he returned to Alva. He worked for Lucky Lee Ranch, which later became Lehigh Corporation, for over 30 years. He had a hay and a pulpwood business. He also had a passion for cattle. He raised cattle throughout Lee County, Florida and his farm in Tennessee. He enjoyed working cows on Sundays with his family and friends and big dinners afterward. He was an avid hunter, built swamp buggies, operated heavy equipment and enjoyed working with his hands. He enjoyed sitting on the front porch with his dog Bruno, watching the sunset over the cypress heads. He is survived by his Wife Donna (Akins) Langford and her family, as well as four children, Dave Langford (Patsy), Lanelle Brown (Bobby), Donnie Langford, Cretia Langford, Sister, Audrey Langford, nine grandchildren and fifteen great-grandchildren. He is preceded in death by his first Wife Dodie (Stewart) Langford, Son, Darryl Ray Langford, Father, Oscar Langford, Mother Gladys (Goggin) Langford, Uncle, David Goggin, Aunt, Verdie (Prevatt) Goggin, Brother, Oscar Langford, Sister, Geraldine (Langford) Thomas and Great-granddaughter Baylee Jean Langford. Funeral services will be held on Thursday, January 12, 2023, at Akin-Davis funeral home in Labelle. The viewing will start at 10am, followed by the funeral at 11am. In lieu of flowers please send donations to Hope Hospice.

To send flowers to the family or plant a tree in memory of David Langford, please visit Tribute Store
Thursday
12
January

Share Your Memory of
David
Upload Your Memory View All Memories
Be the first to upload a memory!
Share A Memory
Send Flowers
Plant a Tree