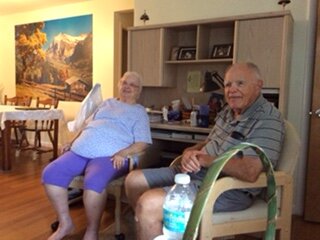 She was the first of five children Troy & Lucy raised together.

The family moved to Plain City, Ohio where Della graduated as an excellent student.

She square danced her way into the heart of Donald Krumm, who she married on October 1, 1955 in New California, Ohio. They had recently reached 65 years(yeah 65) of marriage and he was beside her when she gently passed into God’s hands October 25, 2021.

After her two children where born she went to school for Cosmetology (1963-1964)and had a successful career as a Beauty Shop operator for twenty years. She later worked in Hilliard, Ohio at the local license tag and registration office.

She then managed the construction of a home her husband and herself built in Marysville, Ohio.

After Donald retired in 2003 from the Goodyear belt plant in Marysville, Ohio they moved to Lehigh Acres in SW Florida. Where they enjoyed their retirement.

Loved to bowel and her passion for bowling led to travel, friends, and many memorable times. She bowled a 278 which means she was one pin away from a three hundred perfect game.

She loved country music and gospel music. She visited the Grand Ole Opry many times.

She loved the Buckeyes, with more passion for the basketball team than the football team.

She was a member of The Cornerstone Church in Plain City, Ohio until moving to Florida.

She was preceded in death by her daughter Leeana Krumm.

She was preceded in death by her Mother & Father, Troy & Lucy Caldwell, her Father in law and Mother in law, Ralph & Bernie Krumm, her Sister Sue Hackney and her Brother Stanley Caldwell.

Many years ago Della sat with her family watching a stock car race at Columbus Motor Raceway. As the cars came out of a turn and into sight a crash began to unfold. She noticed a tire had broke free from the tangled mess on the track and was launched her way. She dove onto her children Leeana and Greg sending them to the floor of the concrete spectator stands. As the commotion subsided and the damage realized. It became known a couple of people less than ten feet away were badly and fatally hit by the errant tire. As Della and the kids picked themselves up, Della led them away to spare the young ones of the carnage. However that was my Mom like all the Mothers they always have the backs of their children even if they are sacrificing their own.

I salute my Mother the greatest gift that life bestowed on me.

There will be a Visitation followed by a Service at the Lehigh Acres Church of the Nazarene on Thursday November the 4th at 10:00 A.M.

Followed by a graveside prayer at the Fort Denaud Cemetery.

To send flowers to the family or plant a tree in memory of Della Krumm, please visit Tribute Store
Thursday
4
November

Share Your Memory of
Della
Upload Your Memory View All Memories
Be the first to upload a memory!
Share A Memory
Send Flowers
Plant a Tree